Kelp farming – the next industry in Norway?

Although, Norway has a lot of potential for growing kelp, there are many issues that need to be solved before kelp can blossom as a big industry. What obstacles must be overcome and what advantages come from using it as a resource? 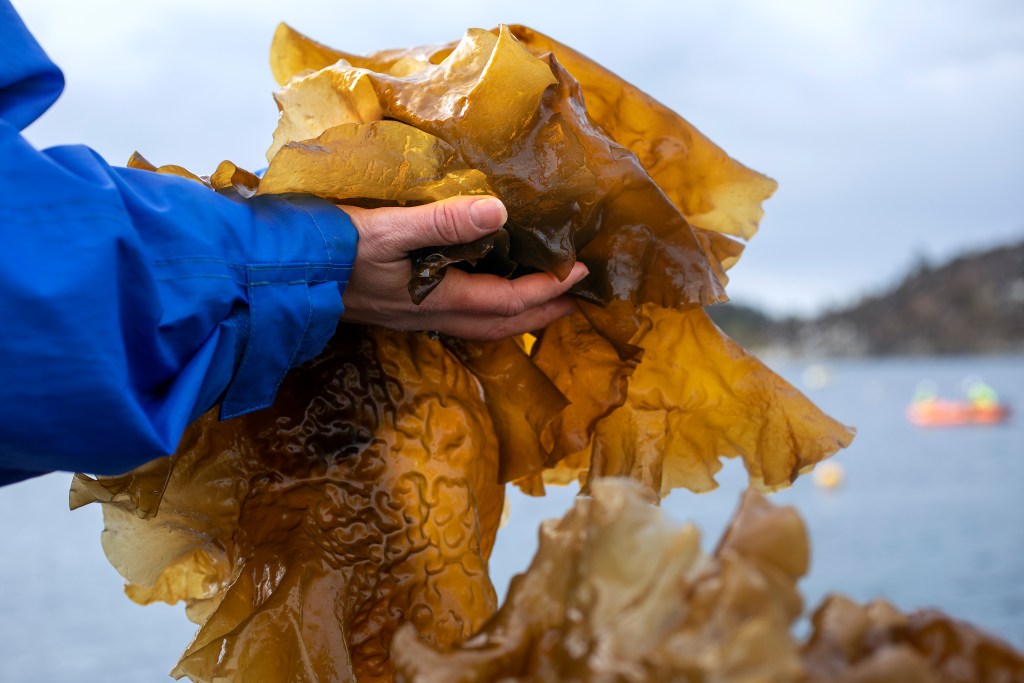 This was discussed at our research and development meeting at the Western Norway University of Applied Sciences 13th of December, where both researchers and industry were represented.

Resource with a lot of benefits and possibilities

Ole Jacob Broch, Senior Research Scientist from SINTEF, explained some of the advantages of kelp farming.

– Kelp cultivation does not require any use of fertilisers, fresh water, or any land, which are very limited resources. It also has very nice properties as a raw material, and can be used for many types of products, which is why it is a good resource, Broch says.

Due to the need for more sustainable production of seafood, algae production has gotten increased attention. It is also an enhanced focus on harvesting organisms from lower parts of the food chain.

Kelp is also a resource with many possibilities. It is stated in a report from the Institute of Marine Research that kelp cultivation for instance can contribute to exchanging soy with marine algae and petroleum-based plastic with bioplastic, be a supplement to kelp trawling and has a potential as a carbon removing measure.

– I think Norway has a great future for kelp production, even though the areas can be a limited resource, there are still lots of space for cultivation, Broch says.

According to him, conditions along the Norwegian coast are very suitable for kelp cultivation. In addition, Norwegian researchers and industry are leading on important, relevant areas.

– There is a very highly competent industry already, who is ready to back it up and able to make great products and produce great raw material, Broch says.

Challenges need to be solved

Even though Norway has the necessary conditions and qualifications for kelp cultivation, there are still challenges that needs to be solved.

At the meeting, several issues where lifted, for instance challenges with processing of kelp and making products to sell. Especially dewatering to make dry products is a very energy demanding process.

Another challenge is finding fitting and available areas.

– One of the biggest challenges in Norway is to produce large volumes of kelp biomass in a way that is economically sustainable, Broch says.

He also mentions the challenge of getting access to suitable areas for cultivation. While there are many possible areas along the Norwegian coast, there are several competing interests wanting the same areas.

– To sum it up, kelp cultivation has a very large potential and with a bit of sensible planning we can make it work, Broch says.

Previous article
Next article
Back to overview
News

The Seafood Innovation Cluster AS